★★★★ ‘A necessary play guaranteed to stoke argument and debate’ The Guardian

‘This really is a play for today’ The Arts Desk

Bradford.  On the eve of a Conservative Party Conference the country is in turmoil and one of its most multicultural cities awaits a visit from the Prime Minister.

Kash, a liberal British Muslim, prepares his address to politicians about the state of the nation. His girlfriend Natalie, a recent convert to Islam, cooks for anti-war protesters gathered at the Town Hall. Lyn, her mother, moans to anyone who’ll listen about the decline of her cherished England.  It’s all too much for Kash’s daughter Qadira, who begins to plan a radical intervention. As the nation questions immigration policies and military support in the Middle East, one family face their own internal conflict of faith, belonging, and who gets to call themselves British.

‘This whole multicultural happy-clappy hippie-dippie love-in is a fantasy.’

Please note that Strobe Lighting is used in this production.

See what audiences are saying: Click here to watch the audience reactions trailer. 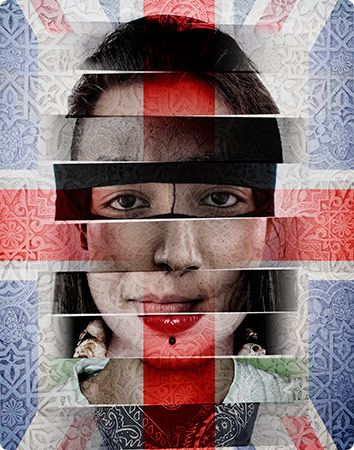