Words of Colour Productions in association with Kiln Theatre presents

Words of Colour Productions hosts five powerful literary voices, inspired by the acclaimed anthology SAFE: On Black British Men Reclaiming Space, to explore the reality of being a black man in Britain today.

Words of Colour Productions is a creative communications agency that promotes, facilitates and develops writers of colour – of all genres, collaborates with arts and creative industries to increase cultural inclusion, and creates multi-platform and multi-media projects to reshape the single narrative misrepresenting culturally diverse communities. 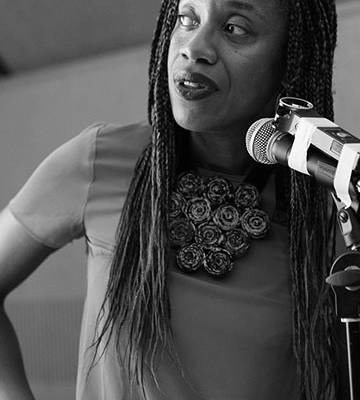 Joy Francis is executive director of Words of Colour Productions, a creative communications agency that promotes and develops writers of colour. The former journalist and journalism lecturer is a creative entrepreneur, writer and producer.

She founded Digital Women UK, co-founded The Black Love Project and helped establish the world’s first Diversity and the Media MA (University of Westminster) with the Media Diversity Institute.

Her work on inclusive reporting has been recognised by the European Commission and Society of Editors. Joy features in The Museum of Colour People of Letters Digital Gallery, honouring 25 impactful literature influencers of colour, the first of its kind in the UK.

Derek Owusu is a writer, poet and podcaster from North London. A graduate in Exercise Science, the University of Manchester, in 2016 he joined forces with Alex Reads to become part of the multi-award winning literature podcast Mostly Lit.

Derek also produced the well-received This Is Spoke podcast for Penguin Random House and Freemantle Media.

Derek collated, edited and contributed to SAFE: On Black British Men Reclaiming Space, a timely anthology exploring the experiences of Black men in Britain (Trapeze Books). His poetry collection That Reminds Me, based on media and life in London, will be published by Stormzy’s Penguin House imprint #Merky Books on 14 November 2019.

Courttia Newland is the author of seven works of fiction including his debut, The Scholar.

His latest novel, The Gospel According to Cane, was published in 2013. His short stories have appeared in many anthologies and broadcast on BBC Radio 4.

In 2016 he was awarded the Tayner Barbers Award for science fiction writing and the Roland Rees Bursary for playwriting.

Elijah Lawal is a writer who used to charge his teenage classmates £1 for stories of Nigerian myths and legends – proving that everyone needs a good side-hustle.

Passionate about debunking stereotypes and shining a light on black culture, his debut non-fiction book The Clapback is a definitive guide to addressing negative stereotypes about the black community.

Elijah is a board member of Creative Access, an organisation dedicated to helping black, Asian, and minority ethnic people get into creative industries.

He is also a communications manager and spokesperson for Google but will definitely not fix your computer – especially if it has a Windows operating system.

Nels Abbey is a British-Nigerian writer, journalist and media executive. A former city banker, he is the author of the political satire on being an ethnic minority in Western societies, Think Like A White Man (Canongate, 2019). Nels was a contributor to SAFE: On Black British Men Reclaiming Space, has written for most leading British newspapers and appeared on most major broadcasters.

Symeon Brown is a reporter and journalist at Channel 4 News and has been hailed as ‘Imaginative, original, thoughtful’ by Jon Snow.

His long read on the ‘Wolves of Instagram’ was nominated for a 2019 Orwell Prize and shortlisted for a 2018 British Journalism Award.

He won a 2018 Medical Journalists’ Association Award for his story on knife crime and the public health crisis facing the major trauma wards in London, and was named as one of Britain’s 30 to Watch: Young Journalist awards by MHP. Symeon has written for a range of publications including Vice, Guardian, Huffington Post, CNN, New Statesman and The Voice. His essay on the commodification of culture in East London is included in the ‘SAFE’ anthology.